Glad to be back y’all.

My driving arm is three shades away from chestnut and the small patch of right thigh, a birthmark that has never had any melanin, stands in bright white contrast against the pink of too much sun; It still has the vague shape of the contiguous United States. This is all left over from sunbathing in Highbury Fields with pale friends who feverishly flock to open spaces to pink themselves when London is generous enough to give them consecutive days of sun.

In Los Angeles it’s just more of the same. The heatwave cats are lying on their backs with pale bellies up, worshiping the sun gods, their stripped limbs spread like starfish. 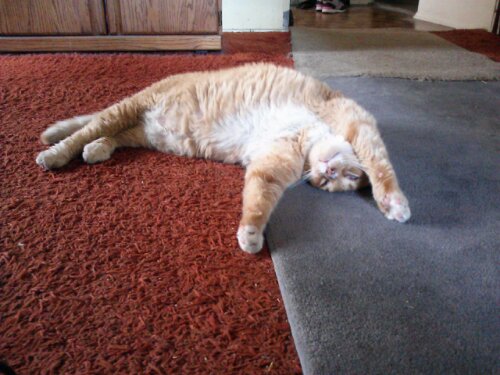 In this weather I’m in perma-bike shorts and a bra, drinking one of the 48 cans of diet soda I was obligated to buy because Stater Bros was having a sale.

I’m on my way up to the bay (that means the San Francisco bay on this side of the country), just booked a ticket on the new Megabus route that runs the 400 miles from Los Angeles to SF at unemployed-staying-on-your-mom’s-couch recession prices. It’s a double decker with shoddy wifi but it boasts none of the beheadings that are wont to happen on the Greyhound.

80% of the drive takes place on the I-5, a straight shot through the green and dusty belly of central California, capped on either end by the civilization of Northern and Southern California. The route starts at the straight sleek pillar of Union Station in Los Angeles, which feels like a grave yard of public transportation’s past; a huge dunny sepulchre of a building festooned with palm trees, vast and cold and only ever half full of foothill commuters.

The megabus is in the hub of bus termini, a small kiosk in the blazing Sun. We are seated according to a lottery, I’m number 34, I sit next to a snoring waiter whose foot keeps knocking my charger out of the port between us.

Leaving Los Angeles you wind your way around the outlying commuter communities until you reach the steep and winding brushy purple passes of the Grapevine. Signs run along the shoulder warning drivers to turn off their air conditioning lest their cars over-heat climbing the deceptively steep incline, but still 3 out of 5 times you’ll pass cars steaming or fully on fire on the shoulder, with burnt out blackened patches peppering the highway from car-deaths passed.

Traveling on the Spanish larga distancia bus networks has accustomed me to hours on buses, and the interior of Spain has a striking resemblance to San Bernardino and the Inland Empire of Southern California, so this all feels fairly routine. The only thing conspicuously lacking on this commute versus my Spanish bus-life is the badly-dubbed Jean Claude Van Damm movies.

Wi-Fi can take care of that.

From there the interstate opens up onto the 5 proper, past Bakersfield and Buttonwillow. It’s here the bus stops at a travel center for a 20 minute lunch. I eat a big liquor store hot dog in the parking lot, standing in the benevolent shade and exhaust of the megabus, watching the mix of students and common folk filter back with sad sacks of fast-food or happy big cups of Starbucks. Everyone’s head is down.

Then it’s back on the bus through orchards and farmland for 5 hours, then a concentrated animal farm colloquially known as “Cowschwitz” full of methane and mud and none of the “happy cows” for which the TV says California is known. There’s a brief glimpse of a famous pea soup place and windmills on hills marking the outlying boundaries of the Bay proper; then you’re passing the BART stations in their outer orbits. The traffic gets distinctly passive aggressive as you cross the SF Bay Bridge, where you’re dumped off at another less-sunny bus depot deep in a weird part of the city. Then you go to the bar.